slinku'i
A hypothetical borrowed word, which would not be legal because it could be interpreted as parts of other words in some contexts.

The slinku'i test (le valslinku'i cipra in Lojban) refers to the test for type 4 fu'ivla being morphologically valid. Words that fail the test are called slinku'i, as the word "slinku'i" fails the test. This rule applies mostly to type 4 fu'ivla, which have to be very careful not to cause any morphological conflicts, they become ambiguous if certain syllables come before them. For example, if you say *pa slinku'i, it becomes the lujvo paslinku'i ("robe-chain-caretaker"). 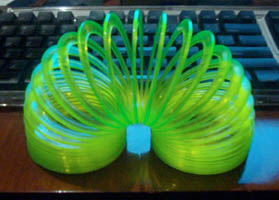 This word was originally born in Loglan where it had the somewhat more reasonable meaning "past-line-related" and was glossed "ancestor" (a typical Loglan style lujvo). A conquering hypothesis is that *slinku'i was originally proposed in Loglan as a fu'ivla to refer to Slinky, a springy toy[1]. The possible meaning of this word doesn't make any difference since fu'ivla don't have to have a source language, though it helps.

Currently in Lojban slinkui denotes slinky toy (note that slinkui is a valid word unlike *slinku'i).

What is the easiest way to determine slinku'i failure?

For example, removing the 's' from slinku'i yields linku'i, which is a valid lujvo. Since a lujvo can be composed of a rafsi plus another lujvo, slinku'i fails the test. This same process can be applied to determine that the word tcalfe fails the test: if we remove the 't', then we are left with calfe, an undefined gismu, and since gismu can end lujvo (e.g. the lujvo terdatni), tcalfe fails the test.

If we insert an arbitrary CV on the front of either slinku'i or tcalfe, then the result is a lujvo. For example, paslinku'i and metcalfe.