Though we won't go through all Lojban tense constructs for now, there is one other kind of tense that I think should be taught now. These are called event contours, and represent a very different way of viewing tenses that we have seen so far. So let's get to it:

Using the tenses we have learned so far, we can imagine an indefinite time line, and we then place events on that line relative to the now. With event contours, however, we view each event as a process, which has certain stages: A time before it unfolds, a time when it begins, a time when it is in process, a time when it ends, and a time after it has ended. Event contours then tells us which part of the event's process was happening during the time specified by the other tenses. We need a couple of tenses first:

Answer: Yay, I'm about to have a home.

But hey, you ask, why not just say ui mi ba {ku} se zdani {vau} and even save a syllable? Because, remember, saying that you will have a home in the future says nothing about whether you have a home now. Using pu'o, though, you say that you are now in the past of the process of you having a home, which means that you don't have one now.

In Lojban, we also operate with an event's natural beginning and its natural end. The term natural is highly subjective in this sense, and the natural end refers to the point in the process where it should end. You can say about a late train, for instance, that its process of reaching you is now extending beyond its natural end. An undercooked, but served meal, similarly, is being eaten before that process' natural beginning. The event contours used in these examples are as follows:

Answer: Oy, you keep eating when you have finished, incredibly, eating something edible! 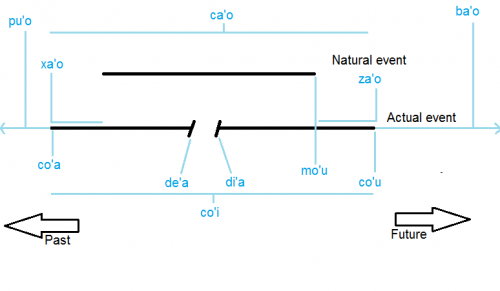 All of these tenses have been describing stages of a process which takes some time (as shown on the graph above; those tenses above the event like). But many of the event contours describes point like stages in the process, like its beginning. As is true of ca and bu'u, they actually extend slightly into the past and future of that point, and need not to be precise.

The two most important point-like event contours are:

Furthermore, there is a point where the process is naturally complete, but not necessarily has ended yet:

mo'u = sumtcita: event contour: Bridi is at its natural ending during {sumti}

Most of the time, though, processes actually end at their natural ending; this is what makes it natural. Trains are not usually late, and people usually retrain themselves to eat only edible food.

Since a process can be interrupted and resumed, these points have earned their own event contour also:

In fact, since jundi means x1 pays attention to x2, de'a jundi and di'a jundi are common Lojban ways of saying BRB and back. One could of course also say the event contours by themselves and hope the point gets across.

Finally, one can treat an entire event, from the beginning to the end as one single point using co'i: